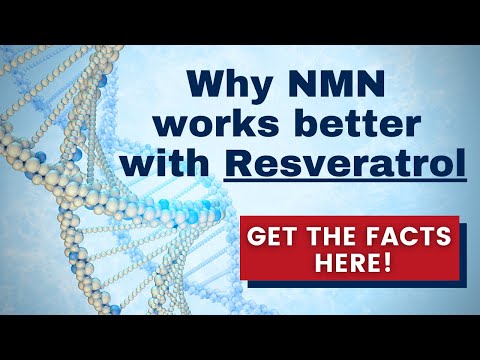 What is NMN?
NMN is the exciting new Anti-Aging supplement used by Harvard Scientists to reverse aspects of aging in old mice. It acts as a NAD+ booster and will change the way the world sees the aging process!

NMN is a naturally occurring element sourced from plants. It is also the most powerful and direct NAD+ Precursor supplement. NAD+ fuels energy production in the mitochondria. In this way it is vital for every process in the human body including immune system function. NMN is the actual compound used by Harvard scientists to reverse aspects of aging in old mice that ignited excitement in NAD+ Anti-Aging research.

HOW IS RESVERATROL IMPORTANT TO ANTI-AGING NAD+?
Resveratrol has several key benefits that promotes longevity and supports NAD+ metabolism that makes it a perfect synergistic match for NMN and other NAD boosting supplements.

*Resveratrol speeds up the biosynthesis and recycling of NAD+ in our bodies. It does this by up-regulating the NMNAT gene, which is a bottleneck-enzyme responsible for the production of NAD+.

Resveratrol can also directly, though selectively, turn on our “longevity genes” called Sirtuins, such as SIRT1, mimicking some benefits of caloric restriction and promoting mitochondrial biogenesis.

*Resveratrol aids in the protection of NAD+ by suppressing inflammatory cytokines that cause the expression of ectoenzyme CD38. CD38 the greatest destroyer of NAD+ in our bodies.

Resveratrol is also an AMPK activator which is a fatty acid oxidation pathway normally induced by exercise and is believed to be beneficial to longevity.

A 2016 study showed, one way in which Resveratrol promotes a healthy cardiovascular system. Is by remodelling the gut bacteria to reduce the production of TMA and subsequent TMAO. TMAO interferes with the normal removal of cholesterol from the bloodstream by blocking its conversion to bile acids in the liver.

A recent study show resveratrol may have the ability to rejuvenate senescent cells and elongate telomeres. ” making senescent cells not only look physically younger, but start to behave more like young cells and start dividing.”

Resveratrol promotes general health and wellness in a multifaceted way that makes it indispensable as a nutritional supplement. “Antioxidant effect of resveratrol in the cardiovascular system”

DISCLAIMER:
The video on this website is for information purposes only. No endorsement of our product is stated or implied.

13 gedachten over “Why NMN works better with Resveratrol? Get the facts here!”