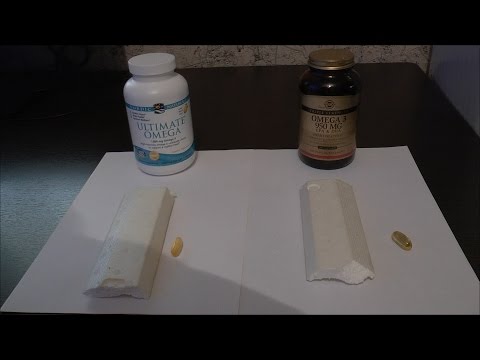 Fish Oils as Triglycerides vs. Ethyl Esters: Why This Matters:

Which form of omega-3 fish oil has a better shelf life?

Additionally, in another study where oxygen concentration was monitored in the headspace of DHA-enriched fish oil stored at various temperatures, results revealed that DHA in ethyl ester form oxidized faster than triglycerides [20]. These results were supported by another clinical trial that found oxidation proceeded more rapidly in ethyl esters than triglycerides [21].

Most relevant is a recently conducted study that is currently under review for peer-reviewed publication. This trial assessed oxidation of triglyceride and ethyl ester fish oil that had similar amounts of EPA and DHA at 5-60°C. The rate of oxidation, as measured by change in peroxide value and Anisidine value, was found to be lower in triglyceride fish oil than in ethyl ester [22].

How do I know if my omega-3 fish oil is an ethyl ester or a triglyceride?

Ethyl ester oils dissolve polystyrene by dissolving the chemical bonds used to keep the polystyrene from collapsing. When these bonds are broken, the air trapped in the polystyrene escapes causing the structure to collapse.

Natural triglyceride fish oils placed in the same cup, on the other hand, will not show leakage after 10 minutes—but they may show leakage through the cup in very small amounts after 2-3 hours.

Most important, however, is the fact that triglyceride fish oils are metabolized and absorbed more efficiently and completely than ethyl ester oils, which may increase overall health benefits for consumers.
Original /