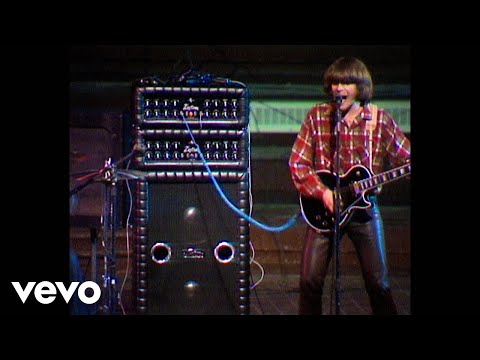 “Fortunate Son” from the highly anticipated release of Creedence Clearwater Revival at the Royal Albert Hall! Order the album today:

The album is being released on September 16th, 2022, on 180-gram vinyl, CD, cassette and digital formats (including ATMOS® immersive and hi-res audio). A Super Deluxe Edition Box Set will follow on November 18th, view more details and watch the unboxing video here:

When CCR took the stage for two nights in April of 1970, the band members had reached the height of their international stardom and arrived ready to prove themselves as equals to the likes of Led Zeppelin, Jimi Hendrix, and the Beatles, who had announced their breakup just days before. Their performance—which included hits like “Born On The Bayou,” “Proud Mary,” and “Fortunate Son” —was met with a 15-minute standing ovation and rave next-day reviews in the UK’s top publications.

More than 50 years after that legendary show, the original multitrack tapes have been meticulously restored and mixed by GRAMMY®-winning producer Giles Martin and engineer Sam Okell. The 180g LP was mastered by Miles Showell at Abbey Road Studios using half-speed technology for the highest-quality listening experience.

Creedence Clearwater Revival at the Royal Albert Hall will be released concurrently with the documentary concert feature film, Travelin’ Band: Creedence Clearwater Revival at the Royal Albert Hall. Directed by two-time GRAMMY® Award winner Bob Smeaton (The Beatles Anthology and Jimi Hendrix Band of Gypsies) and narrated by Academy Award®-winning actor Jeff Bridges, the film takes viewers from the band’s earliest years together in El Cerrito, CA through their meteoric rise to fame. Featuring a wealth of unseen footage, Travelin’ Band culminates with the band’s show at the Royal Albert Hall—marking the only concert footage of the original CCR lineup to be released in its entirety. The film will rollout internationally on September 16, stay tuned for more details coming soon.

About Creedence Clearwater RevivalCreedence Clearwater Revival’s 1968 self-titled debut album introduced the world to guitar-playing brothers John and Tom Fogerty, drummer Doug Clifford, and bassist Stu Cook, four young men out of El Cerrito in the San Francisco Bay Area. Though they emerged in a place and time where trippy psychedelic visions were the order of the day, CCR bucked the trends and instead tapped into a rich, traditional seam of American music that connected to blues, country, rockabilly, gospel, folk and R&B.

During their short time together as a band (1968 – 1972), the band enjoyed an unparalleled period of creativity. They’ve sold over 30 million records in the U.S. alone, releasing 14 Top 10 hits, six Platinum albums (two of which went to number one) and one Gold album. They also managed to play over 150 tour dates around the world, including a headlining spot at Woodstock.

Creedence Clearwater Revival’s canon has become a part of the Great American Songbook. Songs like “Bad Moon Rising,” “Down on the Corner,” “Fortunate Son,” “Have You Ever Seen the Rain,” “Proud Mary,” “Born on the Bayou,” “Travelin’ Band” and “Up Around the Bend” have been ingrained into pop culture — not just as rock staples, but as classic standards.

With so many memorable songs that continue to grace our radio waves and television and movie screens, plus lyrics that still resonate today, Creedence Clearwater Revival is, truly, America’s greatest rock ’n’ roll band.